You can specify the minimum safety factor, the weight of individual pieces of gear (even a single carabiner if you are so inclined), the gear's friction (including pulleys, carabiners, belay devices—even the edge of an I-beam), and whether forces are displayed in pounds, kilograms, or kilonewtons.

You can have warning symbols displayed on any component in the system when the forces exceed your safety factor. Failure symbols are displayed when forces exceed the gear's breaking strength. 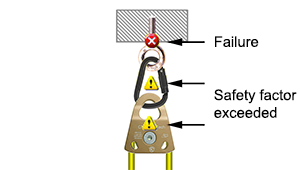